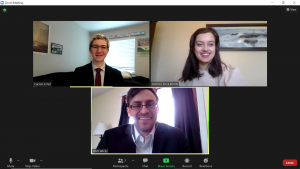 The Transatlantic Dialogues are typically hosted in Paris, but were held virtually this year due to the ongoing pandemic. The Dialogues paired students from various universities across both the United States and Europe to develop and defend policy positions answering the question of how governments ought to regulate social media platforms to reduce the threat of violent extremism. In total, there were six teams of three students.

Aleksander and Anitha joined Wisconsin Speech and Debate to compete as a part of the inaugural UW-Madison 2020 Schuman Challenge team, and used their experience presenting in front of E.U. and U.S. policy experts and officials to formulate their policy for the Transatlantic Dialogues. Nora, a Wisconsin Speech and Debate member with previous experience in parliamentary debates, joined as an understudy with Anitha’s team. 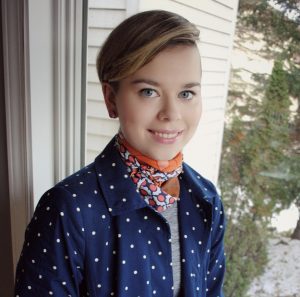 Anitha and Nora’s team chose to focus on feasibility and proposed a policy to regulate social media algorithms through the creation of a transatlantic commission. Aleksander’s team focused on using present institutions within the European Union and the United States to work off existing frameworks already underway in the European Commission.

The competition helped the UW-Madison students apply their internationally-focused coursework in the context of relevant policy issues and to compare and contrast their arguments with students from other universities. The judges praised the teams for the variety of proposals and unique approaches to resolving the question proposed by the competition. Aleksander’s team received second place, and Anitha and Nora’s team received third place in the competition.

All three will be entering the upcoming LaFayette Debates, with Aleksander and Anitha competing as a pair to debate penalties for social media companies which host violent extremist content.

If you are UW-Madison student interested in participating in future debates, please contact UW-Madison Speech and Debate Coach, AJ Carver at acarver@wisc.edu.