This event was originally posted under the working title “Mobilizing Black Germany: Afro-German Women and the Making of a Transnational Movement”

Summary: May Ayim, an Afro-German writer and activist, pursued activism across the globe. But Ayim also developed strong activist ties in Germany. Influenced by Afro-Caribbean feminist and writer Audre Lorde, Ayim and others ushered in the modern Black German movement of the 1980s and 1990s. In doing so, she co-founded the Berlin chapter of the Initiative of Black Germans (Initiative Schwarze Deutsche, ISD), a cultural and political organization. Driven by her diasporic politics and international connections, Ayim employed her writing as a form of intellectual activism to push for equality and minority rights for herself, Afro-Germans, and other marginalized people in Germany. This presentation argues that Ayim’s antiracist, diasporic, and feminist engagement encompassed a grassroots Black internationalism that showed her commitment to confront inequality and discrimination. It was also an internationalism that was rooted in the local, as she publicized examples of oppression at all levels in German society. Traversing borders, Ayim not only produced and shared knowledge about Afro-Germans, but also forged kinships with individuals across the diaspora, People of Color, and white allies. These transnational exchanges helped her achieve recognition as one of the most promising Afro-German activist-intellectuals and performers of her generation. 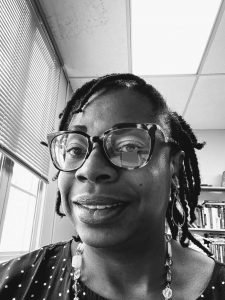 Tiffany N. Florvil is an Associate Professor of 20th-century European Women’s and Gender History at the University of New Mexico. She specializes in the histories of post-1945 Europe, the African/Black diaspora, social movements, Black internationalism, as well as gender and sexuality. She has published pieces in the Journal of Civil and Human Rights and The German Quarterly. Florvil has also coedited the volume, Rethinking Black German Studies: Approaches, Interventions and Histories, as well as published chapters in Gendering Post-1945 German History, To Turn this Whole World Over, and Gendering Knowledge in Africa and the African Diaspora. Her recent manuscript, Mobilizing Black Germany: Afro-German Women and the Making of a Transnational Movement, with the University of Illinois Press, offers the first full-length study of the history of the Black German movement of the 1980s to the 2000s. She is a Board Member of the International Federation for Research in Women’s History (IFRWH) as well as on the Advisory Board for the Black German Heritage and Research Association (BGHRA), the Editorial Board for Central European History, and the Executive Board for the Journal of Civil and Human Rights. She is also an editor of the “Imagining Black Europe” book series at Peter Lang Press. @tnflorvil, Facebook, Women in German (WiG) list, H-German, H-Black-Europe, and H-Women.