Last year, the winner of the first annual Gisela Imm Bloomenkranz Memorial Graduate Student Travel Prize was Kilian Harrer. Kilian Harrer is a doctoral student supervised by Professor Suzanne Desan in UW-Madison’s History Department. He holds a B.A. (2012) and M.A. (2015) in history from the Ludwig-Maximilians-Universität München, Germany. His research interests revolve around the relationship of religion and politics in eighteenth-century Europe (from the Enlightenment through the age of Napoleon). The current working title of his dissertation project is “Pilgrims, Processions, Police: Devotion and Spatial Order in Europe’s Imperial Borderlands, c. 1770-1815.” 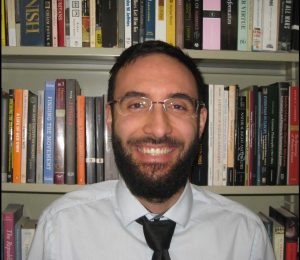 Mr. Sol Bloomenkranz (1923-2017), a friend of the University of Wisconsin-Madison, established this research prize through the Center for German and European Studies as a living tribute to the life and memory of his wife, Gisela. Sol and Gisela Bloomenkranz spent the majority of their married life in major European capitals and US cities and wished to share the very international aspect of their lives with young scholars.

Mrs. Gisela Bloomenkranz was born in Morogoro, Tanzania, and became fluent in German, English, French and Spanish. She held a position as interpreter for Germany’s leading newspaper, the Frankfurter Allgemeine Zeitung. Sol was born in Chicago, visited his family in Poland in the 1930’s, studied political science at Northwestern and history at Zurich, and worked for the US government for over a decade after his military service in World War Two. Sol and Gisela were married in the 1950’s after a long courtship in Frankfurt, Germany. They raised their two sons in Frankfurt, Milan, Brussels, Düsseldorf and Paris, cities where Sol made a career in advertising. Sol described his wife of 58 years as “the most gentle soul who was selflessly committed to making everybody’s life a brighter experience.” A committed transatlanticist, Sol also helped the Center for German & European Studies establish its own Madison Warburg Chapter of the American Council on Germany. Sol and Gisela Bloomenkranz embodied the strong partnership between Europe and the US, which has been so central to peace and prosperity in the era since 1945.

The Center for German and European Studies is glad to be able to assist in this process and looks forward to continuing to help students like Kilian Harrer conduct high level research abroad.