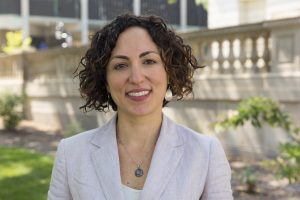 The University of Wisconsin-Madison Center for German & European Studies (CGES) competition has granted Giuliana Chamedes of the Department of History the Sol Z. and Gisela Imm Bloomenkranz Faculty Travel Award for 2020. The grant pays for a faculty member to conduct research for an article, book manuscript or other project in Europe.

Mr. Sol Bloomenkranz (1923-2017), a friend of the University of Wisconsin-Madison, established a fund in the Center for German and European Studies as a living tribute to the life and memory of his wife Gisela. Sol and Gisela Bloomenkranz spent the majority of their married life of 58 years in major European capitals and US cities. Mrs. Bloomenkranz (1917-2014) grew up in different countries around the globe, and due to her fluency in German, English, French and Spanish, held a position as interpreter for Germany’s leading newspaper, the Frankfurter Allgemeine Zeitung. Sol studied Political Science at Northwestern in his native Chicago, until his studies were interrupted by World War II. He served in the army, returned to Chicago to finish his degree, and then went on to graduate studies in history at the University of Zurich. While working for over a decade for the US government in Europe, Sol met Gisela in Frankfurt. Sol and Gisela embodied the strong partnership between Europe and the U.S., which has been so central to peace and prosperity in the era since 1945. The proceeds of the Sol G. and Gisela Imm Bloomenkranz Fund are meant to foster important research and transatlantic work in their memory.

Professor Chamedes plans to use this grant to complete the second stage of her research on her second book project, titled Failed Globalists: Economic Justice, Decolonization, and the Decline of the European Welfare State, 1973-1993, which examines the emergence of a radically new way of conceptualizing state-economy relations. Since World War II, state welfarism had been the norm, but by the early 1990s, Western Europe’s leading economies had cut social service spending, implemented regressive tax schemes, deregulated industry, and encouraged the privatization of publicly owned businesses. Scholars have increasingly identified the decline of European welfare states as one of the most important developments in economics and politics since World War II. But they struggle to explain it. Chamedes’ research suggests that the decline of the European welfare state was a response to the rise of decolonization and the declaration of a New International Economic Order (NIEO), which called for a large-scale redistribution of wealth from North to South, and represented the most serious challenge to the Western world since the end of World War II. As Europe’s politicians, transnational business groups, and leading labor organizations sought to preserve European prosperity and resist the NIEO’s radical demands, they ended up shrinking the welfare state, and ushering in a radically new vision of state-economy relations. This travel award will support research on this topic at the United Nations Archive in Geneva, the Historical Archives of the European Union in Florence, the Food and Agricultural Organization (FAO) archives in Rome, and the International Institute of Social History archives in Amsterdam.