A second session is optional, but recommended. This session can be very informal. You might begin with country teams briefly presenting their position to the class, afterwards allowing ‘countries’ to meet, negotiate, strike deals and debate in a non-structured atmosphere. This might be especially useful if teams don’t have much opportunity to meet other country teams outside of class.

You might also plan a more formal practice session for the simulation. In this case, the team that holds the presidency would get a chance to learn how to run a meeting. Country spokespersons (Ministers) also have the opportunity to become comfortable speaking formally in front of the ‘Council’. During the session, each team should present its position beginning with the presidency and continuing around the table clockwise. (See Set Up below.) If time allows, a formal debate might take place. Or the session might instead end with an informal negotiation session as described above. In the real Council of Ministers, most negotiation takes place informally.

If possible, the room should be arranged before students arrive if possible. Use desks or tables to approximately replicate the arrangement shown below. Place a country placard in front of each team spokesperson’s chair. 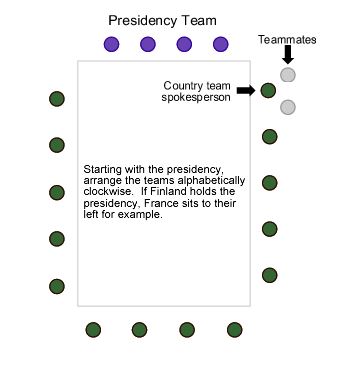