Nils Ringe, Director of the Jean Monnet European Union Center of Excellence for Comparative Populism and Professor of Political Science at the University of Wisconsin-Madison, has a new book, The Language(s) of Politics: Multilingual Policy-Making in the European Union, published by the University of Michigan Press. This highly praised book focuses on multilingualism in the European Union and how a shared reliance on foreign languages and translation services affect politics and policy-making. Ringe argues that multilingualism is an inherent consequential feature of EU politics and thus depoliticizes policy-making by reducing politically charged language.

The Language(s) of Politics, has been deemed, “Essential reading for EU scholars and EU participants” by Liesbet Hooghe, Univ 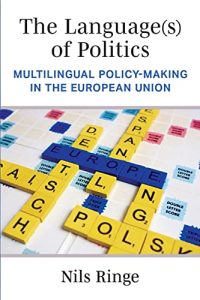 ersity of North Carolina at Chapel Hill and the European University Institute, Florence. Ringe’s book has been selected for open access meaning it’s available at no cost to the public. More information on and access to The Language(s) of Politics is available on the publisher’s website.

The book became available to purchase on January 19, 2022. Click here to order the book.