Sponsored by the Jean Monnet European Union Center of Excellence for Comparative Populism, the Center for Communication and Civic Renewal, the Mass Communication Research Center, the Holtz Center for Science and Technology Studies 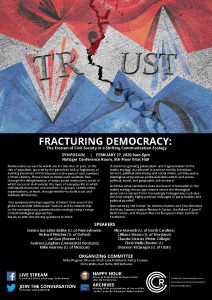 Democracies across the world are in crisis due, in part, to the rise of populism, spurred by the perceived lack of legitimacy of existing processes and institutions in the eyes of vast numbers of their citizens, not to mention the poor policy and administrative performance of democratic institutions more generally.

The crises to democratic societies flow through the delegitimation of major social institutions. Much of this legitimation occurs in civil society: the layer of everyday life in which individuals encounter one another—in groups, communities, organizations, at work, through media—to build trust and mediate differences. Core integrative mechanisms that once provided for some civic common ground, such as cross-cutting social networks, widespread civic membership, daily newspaper and local TV news viewing have been displaced by the “network society” and social media, with clusters of shared opinion and self-supporting facts. At the same time, post-industrialization has further dimmed the economic prospects of a wide swath of the working and middle classes, especially rural families and citizens living in urban centers, magnifying political and cultural differences and adding fuel to unresolved ethnic, class, and racial tensions. Populism, and it associated calls for the “deconstruction of the administrative state,” curtailed immigration, barriers for refugees, and intolerance for ethnic and racial minorities, has further eroded civil society, democratic functioning, and the potential for public deliberation over many social controversies. Political culture is increasingly defined by competing groups who see each other in zero-sum struggles for unequally distributed resources.

Against this backdrop, UW-Madison brought together scholars from across the US and the globe, for a two-day symposium/workshop funded by the Holtz Center for Science and Technology Studies with supplemental funding from The Jean Monnet European Union Center of Excellence for Comparative Populism to consider democratic fracture and its relationship to the contemporary communication ecology using a range of methodological approaches, with two driving questions in mind: (1) How has growing polarization and fragmentation in the media ecology, as reflected in partisan media, broadcast content, political advertising and social media, contributed to ideological and partisan political divides within and across political, social, and geographic sub-clusters? (2) Under what conditions does the flow of information in the media ecology encourage citizens across the ideological spectrum to retrench into increasingly homogeneous sub-clusters that amplify highly partisan messages of party leaders and political pundits?

The resulting research and talks are now available online at the website fractureddemocracy.journalism.wisc.edu and via the link at the end of this article.

This conference was the first of two Holtz Center funded conferences. The second conference in 2021 will focus on civic repair and renewal.

Follow this link to see the full list of talks online as well as other resources on populism.