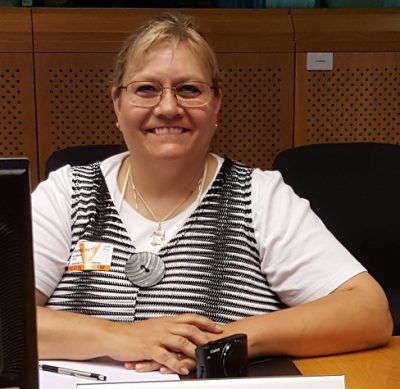 The Jean Monnet European Union Center of Excellence awarded an undergraduate student and a community college instructor an opportunity to participate in a Brussels Study tour in June. This competition will run again in June 2018. Below is a summarized report that Julie Buckman, an instructor at Wisconsin Indianhead Technical College, gave regarding her time in Brussels.

The trip to Brussels was an amazing opportunity to learn about the European Union. I discovered that the reason for the creation of the European Union was to have a peaceful, united and prosperous Europe. With this philosophy, Europe has had the longest running time, 70 years, without a war. It started when the European Coal and Steel Community united the European countries economically and politically to secure lasting peace. It began with the six founding countries: Belgium, France, Germany, Italy, Luxembourg, and the Netherlands. From the original six, they have grown to 28 countries that partake in the European Union.

I cannot help but reflect that the creation of the European Union also parallels the United States in democracy. Each Country to me reflects our individual States that are a part of the larger union of the US. Another parallel to the US is that citizens can move freely from one state to another knowing each state will respect private life, freedom of thought, religion, assembly, expression, and information.

This freedom of movement gives citizens the opportunity to live, work, and retire anywhere in the European Union. Currently 6.5 million Europeans are working in another European Union Member State. Traveling is easier and phone calls are cheaper. The European Union has experienced prosperity due to increased State membership. As an example, ten million jobs were created between January 2013 and September 2016, increasing the employment rate to a high of 69.7 percent.

Highlights of the trip included understanding why the European Union was established and how it continues to work. The European Council is the driving force behind the European Union and its political priorities. The Council works with the European Parliament, the European Commission and the member states. Each body of the European Union sets their own agenda in regards to future policy making. I discovered that this is why the summits attract so much media attention. While I was there, the largest topic of discussion was the United Kingdom and its desire to withdraw from the European Union. I did not realize the total impact the withdrawal of the UK will have on jobs, trade, economy, and travel, to name a few.

I am very grateful to have had such an opportunity to go to Belgium and experience the European Union first hand. The knowledge I gained will provide amazing learning opportunities to share with my students in the classroom.