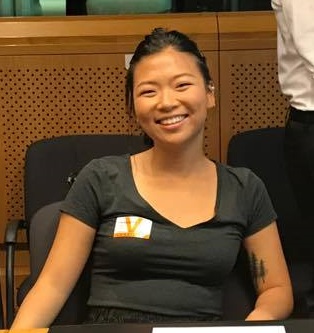 The Jean Monnet European Union Center of Excellence awarded an undergraduate student and a community college instructor an opportunity to participate in a Brussels Study tour in June. Below is a summarized report that UW-Madison student Clara Jeon gave regarding her time in Brussels.

As a history major with a European Studies certificate, I studied the history and politics of the European Union. This program gave me the chance to apply my studies first hand from UW-Madison in Brussels. We visited all of the EU institutions such as the European Parliament, Commission, and Council as well as think tanks, diplomatic missions, and NATO. The Study Tour group consisted of 8 students (including me), and around 30 teachers from all over the United States.

During our site visits, we typically sat for a presentation on a certain topic, such as Brexit negotiations, NATO’s role in the EU, or the EU’s legislative procedure, and had chances to ask our questions at the end. It was an amazing feeling to be able to ask questions and receive thorough and intellectual answers from representatives of the EU. One of my favorite parts of the Study Tour was when we went to the Council and sat in the room where all the heads of states or government convene for EU summits (I sat in Malta’s seat, who currently holds the presidency of the Council).

The Study Tour became even more unforgettable as a lot happened in Europe during our time there. During our first day in Brussels, the EU abolished all cellphone roaming charges within the union so I was able to use my UK sim card that I had from studying abroad while in Belgium. An EU Summit occurred the week we were in Brussels so we were there with all 28 heads of state or government! Lastly, my friend and I saw Nigel Farage sitting in our hotel lobby when we went down to get breakfast, which was very surreal to me.

I could not have asked for a better way to apply my knowledge of the EU and Europe in general. It was a great opportunity to expand my political interests and progress my professional goals of working in the transatlantic community.