French Presidency of the Counsel of the European Union 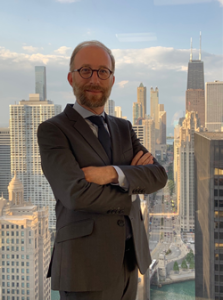 Yannick Tagand was appointed Consul General of France in Chicago in September 2021.

He began his career at the Ministry for Europe and European Affairs in 2005. He worked within the Bureau of North Africa and Middle East in 2007, where he focused on the bilateral relations between France and Egypt as well as France and Jordan. In 2009, he joined the French Embassy in Egypt as Press Advisor. He was then posted in Brussels as Counsellor for the Near and Middle East at the Permanent Representation of France to the European Union from 2013 to 2017. He returned to the Ministry of Europe and Foreign Affairs in Paris in 2017, when he became the Deputy Director of the Egypt-Levant region within the Bureau of North Africa and Middle East. He holds diplomas from Université de Paris I, where he obtained a Master’s in International Relations. He also obtained a graduate degree in Arabic at the Institut National des Langues et Civilisations Orientales in Paris.