Who is Afraid of Democracy? : New Wave of Transformations in the Middle East and North Africa

It is now more than 10 years beyond the Arab Uprisings across North Africa and the Middle East with very little democratic practices taking place. Nonetheless, the region is still characterized by political fluidity and incessant socio-economic and cultural protests. From the past anti-regime Uprisings in Tunisia, Egypt, Syria, and Libya to the present protests in Algeria, Sudan, Iraq, Lebanon, Iran, etc. This new wave of transformations is preoccupied with the same issues of the past. However, the lack of trust in all political institutions has reached the point of no return; and so, the concerned subjects are seeking new strategies to fulfill their aspirations. Protesters, artists, and civic movements have learned from the failed protests and are seeking new goals and using new means to achieve real, lasting, regional advances. But what is different in the latest wave of changes?

To fathom and celebrate the ongoing soul of resistance, the conference departs from a major question that relates to influences and differences between present and past in form, discourse, strategies, demands and practices. This two-day conference brings together different theoretical and (inter-) disciplinary approaches on the new practices and developments that are occurring in the Arab post-uprisings. 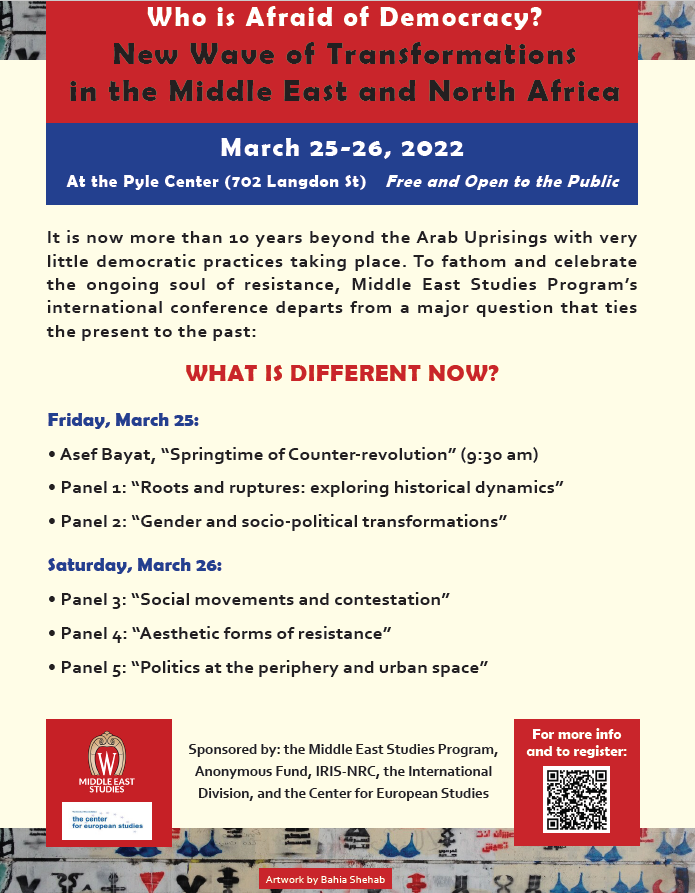 – Panel I on “Roots and Ruptures” explores the key institutional structures and animating concepts that have shaped the Arab world over the past century. What are the historical dynamics of both uprising and authoritarianism in the modern Middle East; how have these dynamics been shaped by both colonial and post-colonial rule; and what can history teach us about the rise and fall of the Arab Spring?

– Panel II on “Gender and socio-political transformations” focuses on the new discursive practices of women under authoritarian regimes and the new ways of mobilization in terms of: the new forms of quotidian visibility through which women protest to the current power relations; how far the discourse has departed from ‘feminist’ to ‘gender’; the daring subversion of the linkage of culture and religion; and sexual violence as a practice that triggers binaries and confrontations.

– Panel III on “Social Movements and Contestation beyond protest” will examine repertoires, networks, and organizations that have undergirded social mobilization in the Middle East over the past century. This panel engages with the ways ordinary citizens interact with local, national, and international influences during moments of both upheavals, namely those longer-term trends in which varied social and political movements seek to change society without directly protesting the ruling regime.

– Panel IV on “Aesthetic forms of resistance” looks at the role art plays in society today and how artists address and engage with political changes, or even negotiate the absence of such a role, in addition to producing knowledge under such circumstances.

– Panel V on “Politics at the periphery and urban space transformation” examines the dialectic relation between socio-political changes and urbanization. New models of segregation, gentrification, fragmentation, and displacements articulate and transform urban subjectivities and belongings in the Arab world.