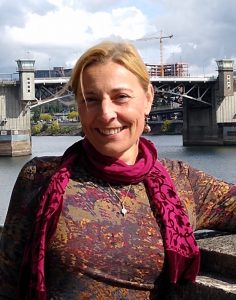 Sonja Klocke is Professor of German and affiliated faculty of the Department of Gender and Women’s Studies. Originally from Germany, Sonja Klocke received her Ph.D. at Indiana University – Bloomington in 2007, and taught at Knox College (IL) for five years before joining the UW-Madison Department of German in 2012. Her research and teaching interests range from the late eighteenth to the twenty-first centuries, and she specializes in twentieth to twenty-first century German culture with a specific focus on postwar and contemporary German literature and film. This includes the legacy of the GDR and the Holocaust, women’s writing, minority literature, and transnational literature. Her monograph Inscription and Rebellion: Illness and the Symptomatic Body in East German Literature (Camden House 2015) appeared in paperback in 2019. A co-edited volume, Christa Wolf: A Companion (with Jennifer Hosek) was published with de Gruyter in 2018, a co-edited volume entitled Protest and Refusal: New Trends in German Literature since 1989 (with Hans Adler) appeared in the fall of the same year, and a co-edited special issue for Colloquia Germanica, New Perspectives on Young Adult GDR Literature and Film (with Ada Bieber) was published in 2019. Currently, Sonja works on a co-edited handbook on GDR culture, and on her new project that revolves around the portrayal of contemporary female terrorists as witches and as victims of modern witch-hunts. She is also proud to serve as co-editor of the quarterly Monatshefte (with Hannah Eldridge, since 2019).