Signe Baumane, “Gender, Marriage, and Depression in the Animated Stories of Latvian Women”

Signe Baumane will discuss her animated films, particularly Rocks in my Pockets (2014), which is about five Latvian women throughout the twentieth century, depression, suicide, marriage, and gender roles in Soviet-occupied and post-Soviet Latvia. Signe will offer a glance at her work-in-progress animated feature film My Love Affair With Marriage, a fresh look on gender and Romantic Love, to be released in 2022. 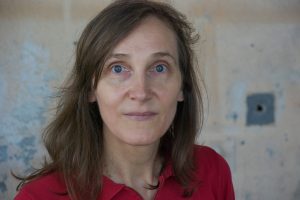 Signe Baumane is a Latvian-born independent filmmaker, artist and animator with an interest in a wide variety of narrative themes, including sex, pregnancy, bodily functions, love, marriage, and the individual vs. society. Many of her films are told with a strong female point of view. Signe is not afraid to experiment, be provocative or bring the most personal of issues to light.

Signe believes that animation is a perfect medium to tell layered, complicated stories. She is fascinated by ability of animation to incorporate a wide variety of art forms.

Her latest projects – the feature films “Rocks in my Pockets” and “My Love Affair With Marriage” – fuse animation with music, theater, science, photography, lighting, three-dimensional sets and traditional hand-drawn animation. Signe is a Guggenheim Fellow and a Fellow in Film for New York Foundation for the Arts. Her 16 animated shorts have screened collectively at over 400 film festivals including Berlinale, Sundance and Annecy. “Rocks In My Pockets” premiered at Karlovy Vary International Film Festival in 2014, went to over 150 film festivals and opened theatrically in the US through Zeitgeist Films. Since 2015, she has been working on “My Love Affair With Marriage”, which will be completed late-2021.