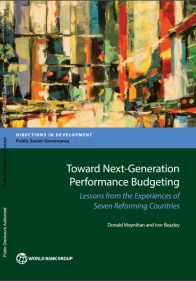 A new book co-authored by La Follette School Director Don Moynihan analyzes the difficulties that national governments have experienced in linking measurement of performance and results to the annual budget process.

The book, Toward Next-Generation Performance Budgeting: Lessons from the Experiences of Seven Reforming Countries, is published by the World Bank, where co-author Ivor Beazley serves as a lead public sector specialist. The authors provide case studies of the performance-budgeting approaches taken by seven countries, including the United States, and offer 10 common challenges for adopting or updating a performance budgeting system.

“Performance budgeting has a deep and enduring appeal in that it promises to improve public sector performance through transparency, a better distribution of resources, and careful management,” the authors write. “However, normative aspirations are poor predictors of how performance data are actually used.”

The case studies show a pattern of disappointment with the results of performance budgeting; yet, a strong belief in the underlying logic has resulted in modified approaches to tighten the links between budgeting and performance, they write.

Following their reviews, the authors identified 10 common challenges to adopting or updating a performance budgeting system. Information overload, prioritizing strategic goals, changing behavior, and learning from experience were among the challenges they outlined.

The study was initiated by the World Bank in response to budget officials in Eastern Europe and Central Asia seeking to learn about the experiences of other countries in implementing performance budgeting. During a November book launch in London, Moynihan said the book is less about technical advice than it is about trying to change perspectives on the goals of performance budgeting.

“Despite its mixed record and some disappointment with it, performance budgeting is still a potent idea,” the authors conclude.