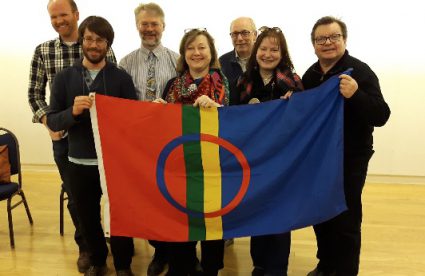 From March 19 through March 22, 2018, Nordic Folklore Community Curator B. Marcus Cederström and Professor Thomas A. DuBois organized an innovative multi-site symposium entitled “Indigenous Sustainabilities: Native Perspectives from Sápmi and the Upper Midwest.” The event was part of the three-year project “Sustaining Scandinavian Folk Arts in the Upper Midwest” (http://folklife.wisc.edu/about) and was sponsored by the Samarbetsnämden för Nordenundervisning i utlandet as well as the Center for European Studies at the University of Wisconsin–Madison.

The event brought four prominent Sámi educators and scholars: Harald Gaski, researcher in Sámi literature and culture at the Arctic University of Norway in Tromsø, Norway; Lena Kappfjell, a researcher in South Sámi culture at the same university; Veli-Pekka Lehtola, professor of Sámi history and culture at the Giellagas Instituhtta of the University of Oulu, Finland; and Jelena Porsanger, former dean of Sámi allaskuvla, the Sámi University of Applied Sciences at Guovdageaidnu/Kautokeino, Norway, and now visiting scholar at the University of Helsinki, Finland. While Gaski and Lehtola are native speakers of Northern Sámi—the largest and most robust of the ten extant Sámi languages—Kappfjell and Porsanger belong to smaller language communities: South Sámi and Skolt Sámi respectively.

Where typical conferences ask each participant to give a single solo address, the Indigenous Sustainabilities symposium tasked its Sámi participants with making multiple shorter presentations in different contexts. On Monday, the visitors met with students, as well as five community members, in the Environmental Studies 600 capstone course “Environmental Conservation with the Menominee Nation” taught by the Nelson Institute’s Professor Jessie Connaway. On Tuesday, the visitors addressed the general Madison public in an open lecture held in conjunction with Tom DuBois’s course Scand/Folklore 443 “Sámi Culture, Yesterday and Today,” a course with participants at UW- Madison as well as at the University of Minnesota-Twin Cities. Over 40 people were in attendance as the four scholars discussed ideas of sustainability in a Sámi and indigenous context. Following the lecture, the visitors met with a a group of about 10 UW-Madison students who comprise the Tribal Libraries, Archives and Museums student organization, as well as faculty and staff from the UW-Madison Libraries. Then the Sámi scholars packed into an eight-person van with Marcus, Tom and Scandinavian Studies graduate student John Prusynski, and headed off toward the Menominee Reservation, in Keshena, Wisconsin.

On Wednesday, the group spent the day on the Menominee reservation, interacting with faculty, students, and community members at the College of the Menominee Nation and the Sustainable Development Institute. After an opening prayer, the Sámi visitors were officially welcomed by Chairman Doug Cox of the Menominee Nation. The day’s many meetings, presentations and discussions were ably coordinated by Chris Caldwell of the College of Menominee Nation Sustainable Development Institute.  Together, Menominee, Sámi, and UW scholars discussed the hard work of decolonizing Indigenous societies, revitalizing threatened Indigenous languages, and working toward exchanges of ideas, students, and personnel. The day included meeting and talking with over 100 people as the group was given a tour of the reservation’s Menominee Language and Culture Commission and the Menominee Cultural Museum, as well as a lunchtime concert by Nammy-award winning singer Wade Fernandez, a member of the Menominee Nation.

On Thursday morning, the group set off for Minneapolis, sampling pancakes at an IHOP before reaching the Minneapolis classroom of Tom DuBois’s Scand/Folklore 443 class, where the visitors answered student questions regarding their Tuesday presentations. Through the wonders of streaming video, students in both Madison and Minneapolis classrooms were able to participate in the Tuesday and Thursday class presentations and discussions. In the evening, the group presented again in a free lecture open to the general public at the American Swedish Institute in downtown Minneapolis. The event was widely attended by about 70 people, including local Sámi Americans as well as people of other Nordic and Indigenous backgrounds. Students and faculty from Saint Olaf College and Gustavus Adolphus College also attended and the visit became a coordinated part of a course on Sámi culture taught by Prof. Kari Lie at Saint Olaf College.

The Indigenous Sustainabilities conference bucked norms in at least two ways. For one thing, it provided a framework in which multiple scholars interacted with each other and with their audiences in an open negotiation of meaning and understanding that foregrounded the ways in which scholars arrive at wider understandings of complex processes like colonization, decolonization, and cultural revitalization. For another thing, it resisted the tendency of institutions of higher education to hoard visitors and events for themselves, embracing a multi-site framework for the symposium that ensured that people in various places and contexts were able to benefit from the visits of these prominent and inspiring scholars. In this way, the symposium lived up to the ideals of the Wisconsin Idea, while also working to decolonize the academic work and mission of the University of Wisconsin–Madison. It contributed uniquely to the goal of helping sustain Nordic folk arts in the Upper Midwest and building linkages between various Midwest communities and Sámi culture workers and institutions.