“Tracing the Impacts and Representations of 1968” 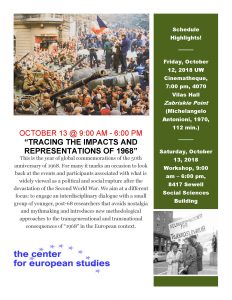 This is the year of global commemorations of the 50th anniversary of 1968. For many it marks an occasion to look back at the events and participants associated with what is widely viewed as a political and social rupture after the devastation of the Second World War. We aim at a different focus: to engage an interdisciplinary dialogue with a small group of younger, post-68 researchers that avoids nostalgia and mythmaking and introduces new methodological approaches to the transgenerational and transnational consequences of “1968” in the European context. We are not interested in a reconstruction of “1968” or an elaboration of what happened in any particular place or context in Europe.  Instead our speakers will focus on the impact(s), especially on the next generation(s), i.e., those who came of age in the 70s/80s or 90s/00s. Both research-based and conceptual approaches (or a combination of both) characterize the work of our presenters: oral history interviews of school children concerning their curriculum and 1968; the global context of 1968 and the cinema; divergent memories of the “Prague Spring” in Eastern and Western Europe; the legacy of terrorism generated by “1968”; and the differentiated gender perceptions of “1968.”  We expect a dialogue will develop precisely among the intersections or resonances between the different fields/disciplines represented by the scholars we have invited.