This lecture is part of the “MARX AND WAGNER. Capitalism and German Sentiment Symposium” organized by the Stiftung Deutsches Historisches Museum in Berlin. The symposium is the third in the Historical Judgement series.

Registration required by 9 April 2021 at dhm.de/marxwagner/anmeldung
Participation free of cost. The conference will be held in German and English with simultaneous translation. The program and additional information are also available online at: dhm.de/marxwagner. 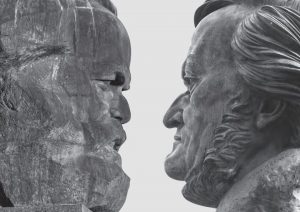 Pamela Potter is Professor of German at the University of Wisconsin-Madison. Her work concentrates on relating music, the arts, and the writing of cultural history to ideological, political, social, and economic conditions, focusing twentieth-century Germany, Europe, and the United States. Her book Most German of the Arts: Musicology and Society from the Weimar Republic to the End of Hitler’s Reich (Yale University Press, 1998) was the first full-scale attempt to examine the field of German musicology in its political, ideological, and economic contexts, using extensive documentation to reconstruct the history of musicological projects and institutions and to reveal the conflicts and compromises that led scholars to find their niche in German society by coming to mutually beneficial agreements with political powers before, during, and after the Nazi era. Her next book, Art of Suppression: Confronting the Nazi Past in Histories of the Visual and Performing Arts (Weimar and Now series, University of California Press, 2016), raises questions about the uniqueness of Nazi culture and aesthetics and traces the roots of these ideas in West German and Anglophone cultural histories. The volume she co-edited with historian Celia Applegate, Music and German National Identity (University of Chicago Press, 2002), brings together seventeen essays that explore how music has come to be so closely identified with German identity, examining trends in philosophy, literature, politics, and social currents, as well as in the creation and performance of folk music, art music, church music, jazz, rock, and pop.  Her current project is a study of Berlin as a music metropolis from the beginning of the eighteenth century to the present. She has been awarded the Alfred Einstein Award of the American Musicological Society; Outstanding Book Award, Choice Magazine; and the Vilas Associate Award, the Romnes Faculty Fellowship, and the Kellett Mid-Career Award from the University of Wisconsin. She has also received grant support from Fulbright, the National Endowment for the Humanities, the German Academic Exchange, the Andrew W. Mellon Foundation, and the Social Science Research Council.