Mark L. Louden, “Pages from the Past: Stories from the Watertown Weltbürger” 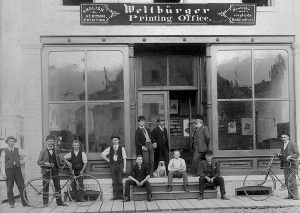 Mark L. Louden received his undergraduate and graduate training in Germanic linguistics at Cornell University. Much of his professional work is centered on the history and contemporary situation of Pennsylvania Dutch and its speakers. His book, Pennsylvania Dutch: The Story of an American Language, appeared in January 2016 with the Johns Hopkins University Press. In addition to his research on Pennsylvania Dutch, in conjunction with his affiliation with the Max Kade Institute for German-American Studies, he is involved in a number of public outreach activities related to the language, faith, and culture of the main speakers of Pennsylvania Dutch today, the Amish and Old Order Mennonites. Louden also serves as an interpreter and cultural mediator for Pennsylvania Dutch speakers in the legal and health care systems. In 2016 he was honored to receive the Jacob and Wilhelm Prize from the German Academic Exchange Service