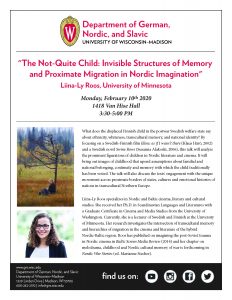 What does the displaced Finnish child in the postwar Swedish welfare state say about ethnicity, whiteness, transcultural memory, and national identity? By focusing on a Swedish-Finnish Elina: as if I wasn’t there (Klaus Härö, 2002) and a Swedish novel Swine Rows (Susanna Alakoski, 2006), this talk will analyze the prominent figurations of children in Nordic literature and cinema. It will bring out images of childhood that upend assumptions about familial and national belonging, continuity and memory with which the child traditionally has been vested. e talk will also discuss the texts’ engagement with the unique movement across proximate borders of states, cultures and emotional histories of nations in transcultural Northern Europe.

Liina-Ly Roos specializes in Nordic and Baltic cinema, literary and cultural studies. She received her Ph.D. in Scandinavian Languages and Literatures with a Graduate Certificate in Cinema and Media Studies from the University of Washington. Currently, she is a lecturer of Swedish and Finnish at the University of Minnesota. Her research investigates the intersection of transcultural memory and hierarchies of migration in the cinema and literature of the hybrid Nordic-Baltic region. Roos has published on imagining the post-Soviet trauma in Nordic cinema in Baltic Screen Media Review (2014) and her chapter on melodrama, childhood and Nordic cultural memory of war is forthcoming in Nordic War Stories (ed. Marianne Stecher).