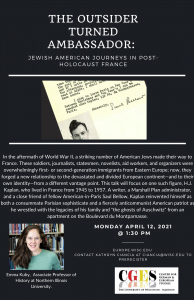 In the aftermath of World War II, a striking number of American Jews made their way to France. These soldiers, journalists, statesmen, novelists, aid workers, and organizers were overwhelmingly first- or second-generation immigrants from Eastern Europe; now, they forged a new relationship to the devastated and divided European continent—and to their own identity—from a different vantage point. This talk will focus on one such figure, H.J. Kaplan, who lived in France from 1945 to 1957. A writer, a Marshall Plan administrator, and a close friend of fellow American-in-Paris Saul Bellow, Kaplan reinvented himself as both a consummate Parisian sophisticate and a fiercely anticommunist American patriot as he wrestled with the legacies of his family and “the ghosts of Auschwitz” from an apartment on the Boulevard du Montparnasse.

Emma Kuby is Associate Professor of History at Northern Illinois University. She is a Europeanist who specializes in postwar France and its empire. Her first book Political Survivors: The Resistance, the Cold War, and the Fight against Concentration Camps after 1945 (Cornell, 2019) received multiple awards, including the George Louis Beer Prize from the American Historical Association.