Co-sponsored by the Center for German and European Studies and the George L. Mosse Program in History. 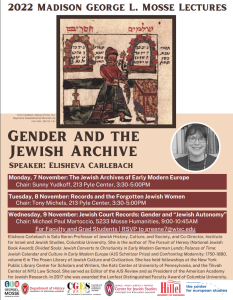 Elisheva Carlebach will be delivering the 2022 George L. Mosse Lectures. She will give two lectures on Monday and Tuesday in room 213 of the Pyle Center and offer a workshop session on Wednesday in the Curti Lounge

Elisheva Carlebach, Salo Wittmayer Baron Professor of Jewish History, Culture, and Society, specializes in the cultural, intellectual, and religious history of the Jews in Early Modern Europe. Areas of particular interest include the intersection of Jewish and Christian culture and its effect on notions of tolerance, religious dissent, conversion, messianism, and communal governance. Her books include The Pursuit of Heresy (1990), awarded the National Jewish Book Award, Divided Souls: Converts from Judaism in Early Modern Germany (2000) and Palaces of Time: Jewish Calendar and Culture in Early Modern Europe (2011), winner of the Association for Jewish Studies Schnitzer Prize. She has twice held fellowships from the National Endowment for the Humanities. She was a Fellow at the New York Public Library Center for Scholars and Writers, Tikvah Fellow at NYU Law School, and Fellow at the Katz Center, University of Penn. She served as Editor of the Association for Jewish Studies Review and chaired the Academic Advisory Council of the Center for Jewish History. She has served as President of the American Academy for Jewish Research and is currently Director, Institute for Israel and Jewish Studies at Columbia. In 2017 she was awarded the Lenfest Distinguished Columbia Faculty Award.