This group of musicians from Sweden performs concerts based on the work of Signe Aurell.  Aurell was a Swedish woman who came to Minnesota in 1913, joined the Industrial Workers of the World, wrote poetry and essays, and self-published a book of poetry titled Irrbloss.

Maja Heurling is a musician and singer working in the Swedish vistradition, a folksong tradition that is several hundred years old and is known for its poetic storytelling. She has teamed up with Ola Sandström to put music to several of Aurell’s poems from Irrbloss. Together, the two formed a band with Livet Nord (who was named Artist of the Year by the Swedish Gala of Folk and World Music a few years ago), and Daniel Wejdin and released a CD, which has received a lot of positive press. 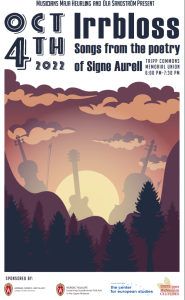