Christopher Cermak, “The Challenge of Immigration: Benefits and Obstacles to Seeking an Integrated Workforce”

Christopher Cermak is a journalist who has returned to the United States after more than six years in Germany. He has most recently worked as an editor and correspondent for Handelsblatt Global in Berlin, covering a range of issues including politics, finance and economics. Before that he worked for the financial news agency MNI (Market News International) out of Frankfurt and as a U.S. correspondent in Washington D.C. for the German Press Agency dpa. A native English and German speaker, Chris graduated from the University of York in England and the London School of Journalism, and recently completed a course in political psychology at Stanford. Chris has recently returned to the United States in a bid to understand, explore and counter the dynamics of partisanship, polarization, prejudice and integration challenges that have divided people and communities across the country. 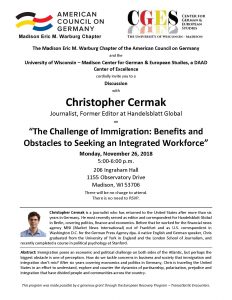