This event is co-sponsored by the Center for European Studies and the Nordic branch of the Department of German, Nordic and Slavic. 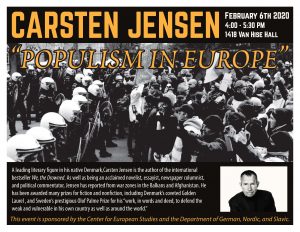 A leading literary figure in his native Denmark, Carsten Jensen is the author of the international bestseller We, the Drowned, which has sold more than half a million copies in twenty languages. As well as being an acclaimed novelist, essayist, newspaper columnist, and political commentator, Jensen has reported from war zones in the Balkans and Afghanistan. He has been awarded many prizes for fiction and nonfiction, including Denmark’s coveted Golden Laurel for the travelogue I Have Seen the World Begin, and Sweden’s prestigious Olof Palme Prize for his “work, in words and deed, to defend the weak and vulnerable in his own country as well as around the world.”