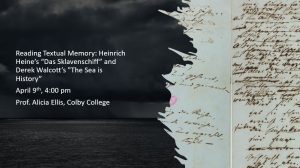 Alicia E. Ellis, Associate Professor of German and Chair at Colby College, holds degrees from Amherst College (A.B. in German and Women’s and Gender Studies) and Yale University (M.A. in African American Studies; M.A., M.Phil., and Ph.D. in Germanic Languages and Literatures). She has studied at the Universities of Göttingen, Konstanz, and Heidelberg in Germany. Prior to her arrival at Colby in August 2016, she was a Five College Fellow in German Literature (2006-2007) and taught in the Department of Women’s and Gender Studies at Amherst College (2007-2008) before joining the faculty at Hampshire College, in Amherst, MA. Professor Ellis is a former Junior Fellow of the Max Planck/Humboldt Research project, “Geschichte + Gedächtnis” (History + Memory) at Konstanz University and served as a postdoctoral scholar in the Department of Germanic Studies at the University of Chicago (2012-2014). Alicia Ellis teaches German literature of the long 19th century (1789 – 1918). Additional teaching and research interests include African American and Caribbean literatures, the Black Atlantic, Gender Studies and speculative fiction. She has written and lectured on Albert Camus, Edwidge Danticat, ETA Hoffmann, Andrea Levy, Sam Selvon, Rahel Varnhagen and Christa Wolf. Her book project, Figuring the Female: Language and Identity in Franz Grillparzer’s Classical Dramas will be published by Lexington Books.