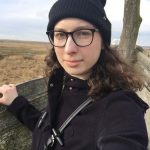 Amelie von Below graduated this past May and received a European Studies Certificate and one of our FLAS awards. We asked her about her experience with European Studies and how it helped her succeed in school.

I studied Marketing, International Business and German at UW-Madison. I grew up bilingual in Germany but lost much of my German after moving to the US. As German wasn’t offered at my middle school, I began to learn French and continued to study it through part of college. However, I was still interested in getting back up to a fluent level of German, so I began to take courses at UW and studied abroad through the Academic Year in Freiburg program. After returning to Madison and finishing the German major, I was hungry to learn a new language and to learn more about areas of Europe I was unfamiliar with. This prompted me to begin taking Danish courses. I received the FLAS fellowship and the ScanDesign fellowship for my senior year, during which I studied abroad at Copenhagen Business School my last semester.

Adding the European Studies certificate to my education was a way to point out an undercurrent that had penetrated my studies all along: European cultures and languages. Ever since my first semester of university, I had selected every class that focused on Europe that fit into my required coursework. I remember being excited about taking Food in Italian Literature to fulfill the literature requirement, and Global Marketing Strategy as a marketing elective.

Marketing fit nicely with my interest in European Studies, as understanding people is at its core, and attitudes and values that people have are heavily influenced by culture and language. I am currently interviewing in Germany within the field of Marketing. I plan on working in Europe for three years before applying for my MBA in Marketing, and eventually building a career in International Brand Management.