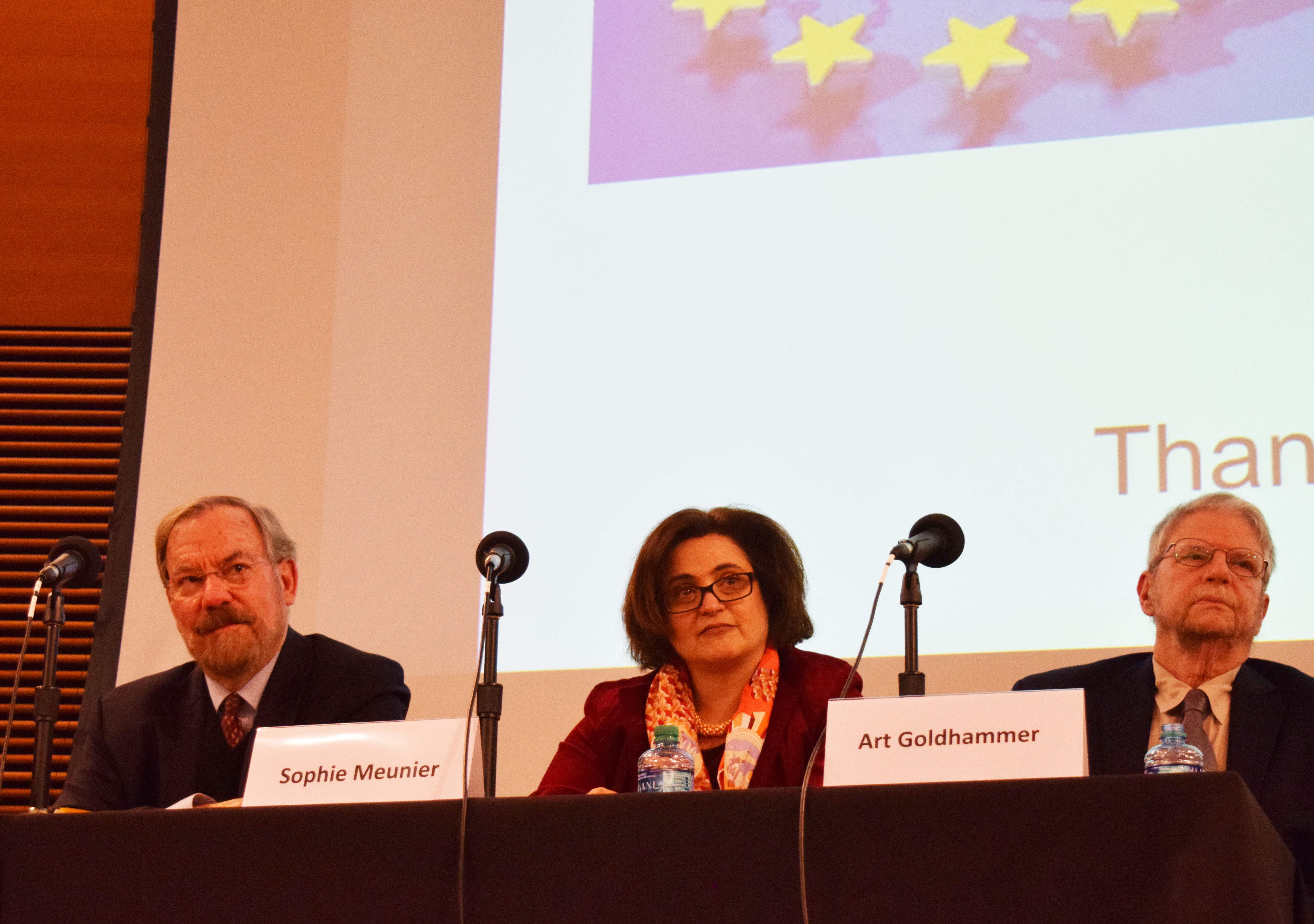 Europe in Crisis: The Future of the EU and Transatlantic Relations

“Why keep the Euro at any cost?” (Stephanie Walter, University of Zurich)

“The United Kingdom is caught in an anti-distribution cycle, and a house is ‘private insurance.’ . . .The soft bigotry of post-code difference really matters in the UK. And homeowners were the core of the Remain vote.” (Ben Ansell, University of Oxford)

“The EU in the 1990s promised its citizens that it could protect them from the negative effects of globalization but keep all the good effects. This is not possible, and has resulted in an existential crisis.” (Sophie Meunier, Princeton)

“Of course there’s a fundamental skepticism today about the value of the EU. Economic ‘facts’ have real human costs—witness the 40 percent unemployment rate for Spanish youth.” (Peter Hall, Harvard University)

These are just a few of the compelling, and troubling, ideas presented by world-renowned scholars on the European Union, who convened at the University of Wisconsin-Madison from April 6-8, 2017. Topics included the future of Europe and the EU, the impact of its economic and political crises on international security, the global economy, and the uncertain future of the post-WWII transatlantic relationship. The profusion of words such as “crisis” and “skepticism” in the opening quotes suggests pessimism about the future of a united Europe—yet solutions were also proffered.

Gillian Tett, the U.S. Managing Editor of the Financial Times and cultural anthropologist, joined Peter Hall, the Krupp Foundation Professor of European Studies at Harvard University, for keynote addresses as part of the Robert M. La Follette School of Public Affairs Annual Symposium, co-sponsored with the Jean Monnet European Union Center of Excellence and the Center for European Studies. Tett presented statistics about resurgent populism in Europe—up to 35% from 10% in the last year, echoing the famously troubled 1930s. For Tett, technological revolution and rapid change have resulted in the new characteristics of a globalized economy, which displays fragmentation, an untrusting electorate, customization (even of voting behavior), and overall unpredictability. In this world, groups “self-select” into reinforced, polarized configurations, and new technologies like Twitter help to create “cybertribalism.”

For Peter Hall and Sophie Meunier, this dislocation is part of the explanation for why resurgent political forces across Member States are now rejecting the ideal of an “ever closer union” in favor of nationalism, leading to “breakaway votes” like that of the UK’s June 2016 decision to leave the 28-member European Union. “The EU needs a safety valve,” said Hall, “as individual member states are no longer convinced that their countries can affect change based in politics.” And Gillian Tett warned, “Can we achieve “normalization” [of the democratic political process] now?. . .or like from 1929 to 1945, are we in for a long and dreadful slog through danger?”

Sophie Meunier suggested that the EU could be more proactive about taking credit when it is due. Member states blame the EU when it is not at fault and take credit for the EU’s achievements. These problems of perception are only exacerbated by real problems requiring quick action, yet the EU is not granted the necessary “competences” to act. The failure to quickly solve the Eurozone crisis or the influx of refugees fleeing conflicts in the Middle East have given rise to “cultural irredentism,” or the propensity to believe in a mythical, racially homogeneous Christian European past, which conveniently erases the reality of European colonial pasts and anti-Semitism, among other forms of bigotry, noted Peter Hall.

The dangers of populist tactics such as blaming migrants and refugees are easily recognized by students of the European World Wars, let alone the rise of fascism. But, as Ben Ansell noted at the day-long academic workshop on the Future of Europe that followed the La Follette Symposium, the ideological poles to which we are accustomed, especially the traditional left-right divide, no longer suffiently capture today’s lines of political conflict. Fault lines run between cosmopolitanism and nationalism, or visions of open and closed societies, and the European Union – indeed, the very idea of a united Europe – is caught in the frontlines of these new battles. In response, Hall argued, the EU must be more open to a “multi-speed Europe;” Meunier pressed for a long-overdue redistribution of benefits; and Art Goldhammer, an expert on French politics at Harvard University, urged greater balance between rules (which Germany favors too strongly) and discretion (which France uses too often).

Equally interesting papers and remarks were delivered by other experts on international politics and economics, such as Chad Bown of the Peterson Institute for International Economics and Mark Hallerberg of the Hertie School of Governance in Berlin, among others. Meunier ended on the happy note that todays’ European turmoil may indeed have wonderful, if unintended, consequences for students of Europe—future employment—while Hall raised the possibility that Brexit and the election of Donald Trump may prove to be catalysts for renewed European ambition.

These proceedings were made possible by a grant from the US Department of Education Title VI National Resource Center program to the Center for European Studies, European Commission Erasmus + Jean Monnet Center and Project grants, and by the Robert M. La Follette School of Public Affairs. Of great importance were the major sustained efforts of faculty conference convenors, Associate Professors Mark Copelovitch (Political Science, La Follette) and Nils Ringe (Political Science), along with Don Moynihan (La Follette). Bridget Pirsch and Bridget McMahon, respectively of La Follette and European Studies, made it all happen (except the tornado).