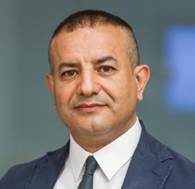 Amara Lakhous was born in Algeria in 1970. He moved to Italy in 1995. He has a degree in Philosophy from the University of Algiers and another in Cultural Anthropology from the University of Rome-La Sapienza where he completed a Ph.D. dissertation entitled “Living Islam as a Minority.” He is the author of five novels, three of which were written in both Arabic and Italian. His best known works are the much acclaimed Clash of Civilizations Over an Elevator in Piazza Vittorio (2008), Divorce Islamic Style (2012), and Dispute over an Very Italian Piglet (2014). The Prank of the Good Little Virgin in Via Ormea, came out in Italian in 2014 and published in English by Europa Editions in May 2016. His latest novel in Arabic is Tir al-lil, The Bat (2019). His novels have been translated from Italian into many languages, including English, German, French, Spanish, Dutch, Japanese, Danish and Berber. Lakhous has been awarded, among others, the Flaiano Prize in Italy in 2006 and the Algerians Booksellers Prize in 2008. Clash of Civilizations Over an Elevator in Piazza Vittorio was adapted into a movie by the Italian director Isotta Toso in 2010, while also being staged in several theater productions and chosen for the 2014 New Student Reading Project at Cornell University. He moved to New York City in August of 2014 and is currently a Visiting Professor at New York University.

See this event on our event calendar