In this event sponsored by the Center for German and European Studies, noted author and literary scholar, Tanja Dückers presents excerpts from her 1999 novel, Spielzone. The native Berliner shares photos from her experiences in the city at the turn of the millennium, as well as modern-day images with which to compare them.

Through readings from her novel and stories from her own life, Dückers illustrates what an exciting, beautiful, and sometimes scary place the city was for young people in the 90s, and how gentrification and changing trends have altered Berlin in the decades since.

The introduction and Q&A portions of the event are led by UW-Madison Center for German and European Studies Director, Dr. Sonja Klocke. The entire event is in German. The recording is available below.

More about the author: 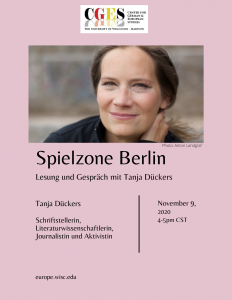 Tanja Dückers is an award-winning author, literary scholar, journalist, and activist. She has published 18 books. Her first novel, Spielzone (Zone for Play, 1999), depicts the adventures of young people exploring post-Iron Curtain life in Berlin. Apart from prose works, she has published essay volumes, books of poetry, children’s books and plays. Her articles have appeared in publications such as Die Zeit, Spiegel, taz, Jungle World, and National Geographic. Dückers is an active member of Amnesty International, the international PEN, the Christa-Wolf-Foundation, ver.di (a German trade union), Slow Food, and the Berlin-based refugee-support-group, WIR MACHEN DAS (“we’re doing it”), and of Weiter Schreiben (“Write On”-a project for authors, who are seeking asylum). She also founded her own chocolate brand, “Preussisch süß – Berliner Stadtteilschokolade”.