Q&A for Teaching About Ukraine: Webinar for K-12 Educators 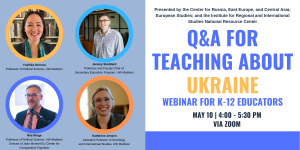 Co-sponsored by the Center for European Studies, Center for Russia, East Europe, and Central Asia (CREECA) and the Institute for Regional and International Studies (IRIS)

This virtual event intends to create a space for K-12 educators a space to engage with regional experts, address concerns, and explore ways to talk about Russia’s invasion of Ukraine in the classroom. Beginning with short presentations by four UW-Madison panelists, teachers will then have 30 minutes for Q&A/discussion. The webinar will encompass Ukraine and Russia’s historical relationship, what is happening now, and potential future outcomes; the Western European reaction to the invasion and its impact; and examine current events from a global perspective. Jeremy Stoddard (Department of Curriculum & Instruction) will moderate this event and offer insight into how to incorporate the webinar’s lessons into the classroom. 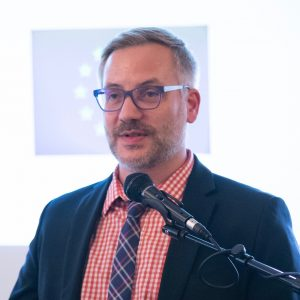 Ringe’s new book, The Language(s) of Politics: Multilingual Policy-Making in the European Union  (Michigan University Press, 2022) investigates the impact of politicians’ reliance on shared foreign languages and translation services on EU politics and argues that it depoliticizes policy-making by reducing its political nature and potential for conflict. He also has an edited volume forthcoming titled, Populists and the Pandemic: How Populists Around the World Respond to COVID-19 (Routledge, Extremism & Democracy Series, with Lucio Renno, University of Brasilia), which is based on a year-long lecture series sponsored by the Jean Monnet EU Center for Comparative Populism.

Ringe previously published The European Union and Beyond: Multi-Level Governance, Institutions, and Policy-Making (ECPR Press/Rowman & Littlefield 2020; co-edited with Jae-Jae Spoon, University of Pittsburgh; winner of the 2021 Larry Neal Prize for Excellence in EU Scholarship), Bridging the Information Gap: Legislative Member Organizations as Social Networks in the United States and the European Union (University of Michigan Press 2013; with Jennifer N. Victor, George Mason University), and Who Decides, and How? Preferences, Uncertainty, and Policy Choice in the European Parliament (Oxford University Press 2010). 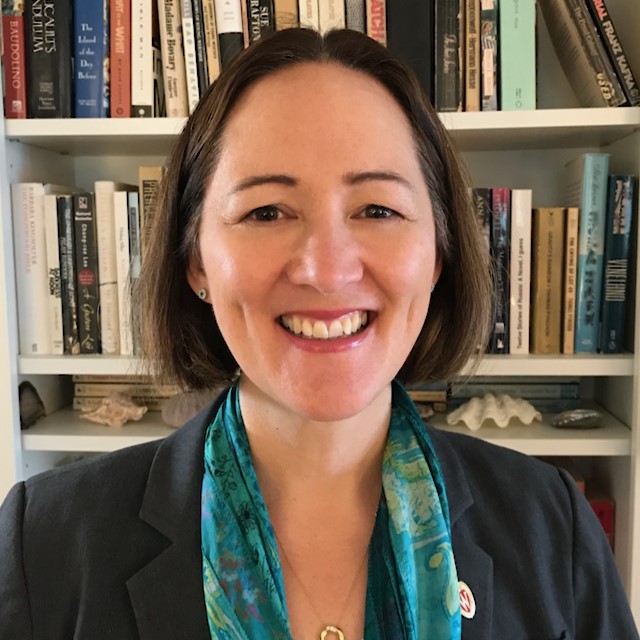 Yoshiko M. Herrera is a Professor of Political Science at the University Wisconsin Madison. Her research on Russian politics; nationalism, identity and ethnic politics; political economy and state statistics (national accounts); and international norms, has been published with Cambridge University Press, Cornell University Press, Perspectives on Politics, Comparative Politics, Political Analysis, Social Science Quarterly, and Post-Soviet Affairs, and other outlets.  In Madison, Herrera teaches courses on comparative politics, social identities and diversity, and post-communist politics, and in 2021 she was a recipient of the Chancellor’s Distinguished Teaching Award at UW-Madison. For a recent profile of Herrera by the UW Alumni Association in relation to the war in Ukraine, see this link. 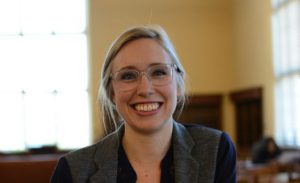 Katherine Jensen is an Assistant Professor of Sociology and International Studies at the University of Wisconsin-Madison. She earned her PhD in Sociology at the University of Texas at Austin in 2018, with a Doctoral Portfolio in African and African Diaspora Studies. Before joining the University of Wisconsin, she was a Post-Doctoral Fellow in the Center for Inter-American Policy & Research at Tulane University. She is a former Fulbright Fellow and P.E.O. Scholar. As an ethnographer, her research interests include race/racism, political sociology, and forced migration in the Americas, with a focus on Brazil. Her work has been published in Ethnic and Racial Studies, Qualitative Sociology, Social Currents, City & Community, and Contexts, as well as in edited volumes with university presses. Her book project, tentatively titled The Color of Asylum: The Racial Politics of Safe Haven in Brazil, is under advance book contract at the University of Chicago Press. 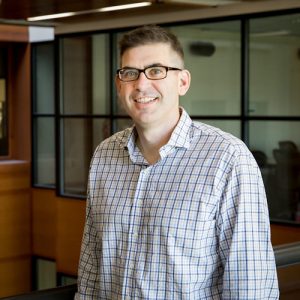 Jeremy Stoddard is Professor and the Faculty Chair of the Secondary Education Program. His research examines the role of media in teaching and learning history and democratic citizenship – with a particular focus on engagement with difficult or marginalized histories and contemporary controversial issues. His work has been published in Journal of Curriculum Studies, Teachers College Record, Curriculum Inquiry, and Learning, Media and Technology. He has also co-authored or co-edited three books, including Teaching Difficult History Through Film (Routledge, 2017). He has served as Editor for Theory and Research in Social Education and has held national leadership roles in the Teaching History SIG of AERA and as a member of the Executive Board of the College and University Faculty Assembly of the National Council for the Social Studies. Prior to joining the UW faculty in 2019, Stoddard was on faculty at William & Mary, where he served as Chair of the Department of Curriculum & Instruction, founded and directed the interdisciplinary program in Educational Studies, and was an affiliated faculty of the Film and Media Studies program.