Co-sponsored by European Studies and Department of French and Italian. 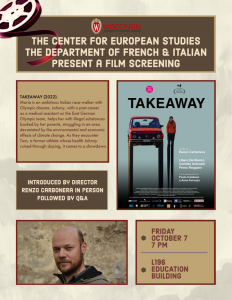 Renzo Carbonera is an award-winning Italian director of feature-length and documentary films distributed and broadcast worldwide. His work focuses on the pressing issues and dilemmas of our time, including climate change, economic crisis, drug abuse, social disintegration, and the on-going dramas associated with European unification and globalization. His award-winning first short feature, Hemingway’s Pen, premiered at the Venice Film Festival and was selected for more than 30 international film festivals (including Raindance, Tirana, New Delhi, Naoussa, Bari BiFest). 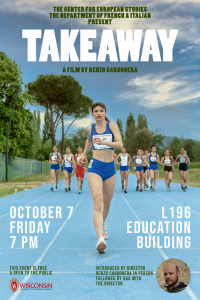 His first feature film, Resin, premiered at the Montreal Film Festival in 2017 and in Italian theatres in May 2018. Known for his commitment to environmentally sustainable film production practices, Resin links a focus on climate change to the status of local Italian/European cultures, languages and traditions. Selected for more than 20 international film festivals and distributed in 15 countries, Resin was nominated at the Italian Golden Globes and Ciak d’Oro in 2019, was the recipient of the Green Movie Award, and ranked 6th best film released in Italy in 2018 for FICE (the Italian Art House Theatres and Cinemas Association). Premiering in 2022 and distributed by Fandango, his second film TakeAway, stars Libero De Rienzo, Carlotta Antonelli and Paolo Calabresi, and focuses on the issue of performance-enhancing drugs in athletics while connecting that theme to environmental, economic and political crises in Italy and Europe today. Operation Pluto, his third feature film starring Andrea Pennacchi, is currently in post production. Carbonera is also the Artistic Director of the Belvedere-Gschwent Foundation and responsible for audiovisual and multimedia projects in its museums.