Ana Luìsa Amaral, “Something in Between: The Languages of Poetry” 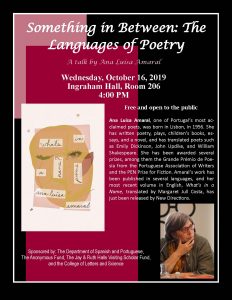 Ana Luìsa Amaral, one of Portugal’s most acclaimed poets, was born in Lisbon, in 1956. She has written poetry, plays, children’s books, essays, and a novel, and has translated poets such as Emily Dickinson, John Updike, and William Shakespeare. She has been awarded several prizes, among them the Grande Prémio de Poesia from the Portuguese Association of Writers and the PEN Prize for Fiction. Amaral’s work has been published in several languages, and her most recent volume in English, What’s in a Name, translated by Margaret Jull Costa, has just been released by New Directions.