Miguel Pereyra, “Flows of Academic Knowledge Transfer in Today’s Spain: The Rise of the New Field of Educational Leadership” 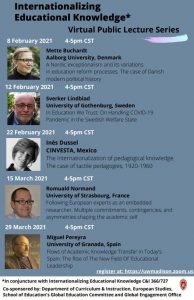 Co-sponsored by the Center for European Studies, the Department of Curriculum and Instruction, and the School of Education’s Global Education Committee and Global Engagement Office. Introduced and organized by Thomas Popkewitz, Professor of Curriculum and Instruction as part of the Center for European Studies Spring 2021 Virtual Lecture Series and as part of the Internationalizing Educational Knowledge Virtual Public Lecture Series.

In modern Spain, in the last years of the 60s began a process of modernization when the Franco dictatorship entered its final crisis. Then General Franco’s regime attempted to carry out a systemic reform of its whole educational system with the assistance of UNESCO, the OECD and the World Bank and several American organizations, which can be conceived today as a process of using very broad educational reforms as a strategic source of the State to retrieve some of its legitimacy during its crisis. In 1970 the dictator passed the LGE (Ley General de Education, General Law of Education). This law sought to diffuse new languages of social change by means of a mystified articulation of social modernization. From this reform the presentation sketches an analytical framework to interpret and explain how the flows of academic knowledge that underlie educational reforms, academic knowledge and actors are produced and used mainly to elaborate and recommend proposals for action. The modernizing reform of the LGE is compared to later reforms to examine the promises of producing a real educational change in schooling and teacher education, and how they are introducing a “new field” of educational leadership and the instrumental character the competence-based education into the compulsory school curriculum, used as a driving slogan for powering today’s educational reform. 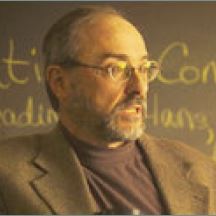