Joan Anim-Addo, Understanding Windrush and the Black Caribbean Diaspora in the U.K. 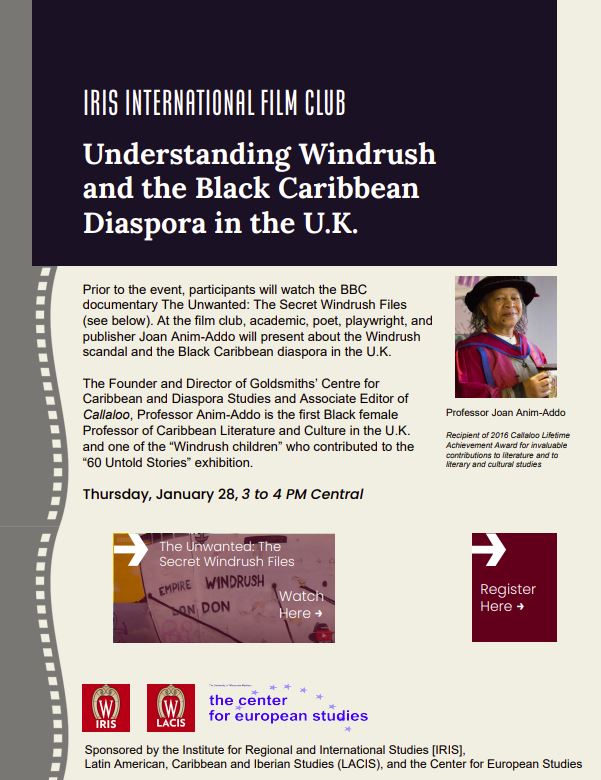 Co-sponsored by the Center for European Studies, IRIS, and the Latin American, Caribbean and Iberian Studies Program.

Register via this link: https://www.eventbrite.com/e/understanding-windrush-and-the-black-caribbean-diaspora-in-the-uk-registration-132465324351

Join us for our online January K-12 Teacher January Film Club event with academic, poet, playwright, and publisher Professor Joan Anim-Addo from Goldsmiths, University of London. Professor Anim-Addo will present about The Windrush scandal and Black Caribbean diaspora in the U.K.

The Founder and Director of Goldsmiths’ Centre for Caribbean and Diaspora Studies, Professor Joan Anim-Addo is the first Black female Professor of Caribbean Literature and Culture in the UK and one of the “Windrush children” who contributed to the “60 Untold Stories” exhibition. Some of Anim-Addo’s recent research activities include: Caribbean Literature and diaspora, women’s writing, Feminist perspectives, and Black presence in Europe.

Prior to the event, participants should view the BBC Documentary: The Unwanted- The Secret Windrush Files (https://www.youtube.com/watch?v=f_rzJTNZSLM).

“David Olusoga opens secret government files to show how the Windrush scandal and the ‘hostile environment’ for black British immigrants has been 70 years in the making.

The film features Sarah O’Connor, Anthony Bryan and Judy Griffith. Settled here legally since childhood, they were re-classified as illegal immigrants by new ‘hostile environment’ regulations. Unable to show proof of their nationality status, they lost jobs, savings and their health, facing deportation back to countries they could barely remember.

David reveals how today’s scandal is rooted in the secrets of the past. The first Windrush generation were Commonwealth citizens – many of them ex-servicemen – coming to rebuild war-torn Britain. Yet even before arriving, they were viewed by the government with hostility.”

Register via this link: https://www.eventbrite.com/e/understanding-windrush-and-the-black-caribbean-diaspora-in-the-uk-registration-132465324351