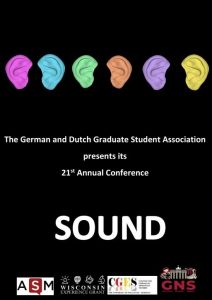 Sponsored by the Center for German and European Studies

Tyler Whitney‘s research and teaching focuses on the intersection of media theory, sound studies, and nineteenth and twentieth-century German literature. His first book, Eardrums: Literary Modernism as Sonic Warfare (Northwestern UP, 2019) examines the coevolution of literary modernism and acoustic modernity from German Unification in 1871 to the rise of National Socialism in the 1920s. Articles on related topics including Romantic physiology and aesthetic theory around 1800, industrial noise and Franz Kafka’s literary aesthetics, and the Nazi origins of magnetic tape recording have appeared in journals such as Germanica Colloquium, Goethe Yearbook, and Germanic Review.

Sabine Gross came to the UW-Madison as a faculty member in 1992, with a Staatsexamen from Frankfurt University and a Ph.D. from the University of California, Santa Barbara. In addition to being a professor of German, she has served as Faculty Director of the Letters and Science Honors Program since 2015. Sabine teaches modern German literature, literary theory, and theater, and was awarded a UW-Madison Chancellor’s Distinguished Teaching Award in 1999. Since 1993, she has produced and/or directed the biennial “German Play” on campus (including plays by Handke, Dürrenmatt, Gryphius, Soeren Voima, Horváth, Fassbinder, Büchner, and others). 2003-2007 she served as Vice President and President of the International Johann Gottfried Herder Association. Dr. Gorss is a Book Review Editor of the journal Monatshefte and a long-time member (and sometimes Executive Council member) of the International Society for the Study of Time.

Learn more about the GDGSA Conference.