Jimmy Träskelin, “A Musical Lecture: ‘Displaced Sympathies: Finnish Out- and In-Migration, Then and Now'”

Co-sponsored by the Center for German and European Studies, the Sustaining Scandinavian Folk Arts in the Upper Midwest grant, and the Margaret B. Cargill Philanthropies in the Department of German, Nordic & Slavic. 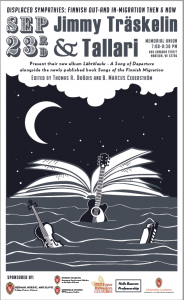 Despite restrictive US immigration policies that severely limited the ability of citizens of the Russian Empire to immigrate to the United States during the nineteenth and early twentieth centuries, some ten percent of the Finnish population left the Finnish Grand Duchy (then an integrated part of the Russian Empire) to try their luck in the New World. They chronicled their experiences not only in letters home but also in songs, which they performed in Finnish and sometimes recorded in the fledgling ethnic record industry in places like New York and Chicago.  Today, as Finland and other European countries struggle with massive numbers of refugees and asylum seekers, this historic migration and the songs that accompanied it has taken on new meanings. At this event, publishing manager, writer, and musician Jimmy Träskelin will speak on the meanings of songs of migration in contemporary Finland, reflecting on two joint projects he has been involved in: a new English translation of a set of Finnish migration songs, Songs of the Finnish Migration, co-published by the Finnish Folk Music Institute and the University of Wisconsin Press, and a newly released CD entitled Lähtölaulu: Song of Departure, which premiered at the Kaustinen International Folk Festival in May 2019.  Träskelin will speak in two UW-Madison classes as well as present in an evening lecture with musical demonstration.