THIS EVENT HAS BEEN POSTPONED UNTIL MARCH, 2021 DUE TO COVID-19

Sponsored by the Law School and African Studies, with the Center for German and European Studies. Organized by Professor Jason Yackee. 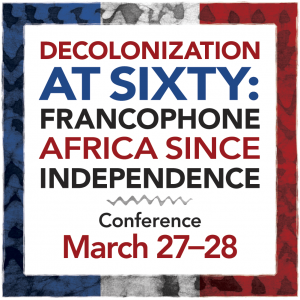 This event will offer an intellectually rigorous and cross-disciplinary exploration of the process of decolonization in Francophone Africa. The conference theme is inspired by the upcoming sixtieth anniversary of formal independence in much of French-controlled Africa. Our interest, however, is not in explaining or understanding the granting of formal independence as a discrete event of the past. Rather, we are interested in exploring decolonization as an ongoing process through which France and its former possessions have struggled over the course of decades to redefine relationships of complex and lasting interdependence. The course of that struggle reflects acts of agency, both by France and by her African counterparts, but it also reflects the stickiness of past arrangements and the shocks of dramatic global political and economic change. The conference will address this theme from two interrelated angles.

First, we want to explore the current contours of Franco-African interdependence, and how they came to be, especially in relation to where France and her newly sovereign partners started sixty years ago. And we want to understand how much or how little progress France and Francophone Africa—including France’s former possessions in the Maghreb—have made in addressing some of the most important socio-economic challenges resulting from or brought to the surface by formal decolonization. The result, we hope, will be a bilan (accounting) in the truest sense—a balance sheet that appraises where decolonization stands, and how it got there, and where it is going, both for France and her former African possessions.

Learn more about the conference.

Mamadou Diouf is the Leitner Family Professor of African Studies and the Director of Columbia University’s Institute for African Studies. He holds a Ph.D. from the University of Paris-Sorbonne. Before joining the faculty at Columbia University, he was the Charles D. Moody Jr. Collegiate Professor of History and African American Studies at the University of Michigan, from 2000 to 2007. Before that, he was Head of the Research, Information, and Documentation Department of the Council for the Development of Social Science Research in Africa (CODESRIA) and faculty member of the History Department of Cheikh Anta Diop University in Dakar, Senegal.

Professor Diouf is a member of the editorial board of several professional journals including the Journal of African History (Cambridge), Psychopathologie Africaine (Dakar), la vie des idées.fr (Paris), Public Culture, and a co-editor (with Peter Geschiere) of the book series, Histoires du Sud/Histories of the South published by Karthala, Paris and New National Histories in Africa published by Palgrave MacMillan.