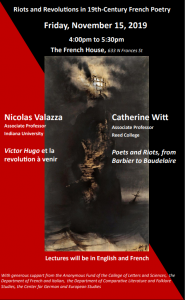 Catherine Witt works on French literature and philosophy post-1750s. Her research interests center on Romantic poetry and the notion of philological imagination in authors of the first half of the nineteenth century, ranging from André Chénier and Giacomo Leopardi to Charles Baudelaire. She has written on the emergence of the modern prose poem; the “found object” in early French Romanticism; the anecdote; the lexicography of Charles Nodier; the elusive notion of the nescio quid; Baudelaire reading Chateaubriand; among other topics. Along with Joseph Acquisto and Adrianna Paliyenko, she recently co-edited Poets as Readers in Nineteenth-Century France: Critical Reflections (2015), a collection of essays on how poets approach reading as a notion, a practice, and a political praxis that informs their writings as well as their relationship to readers. Since her arrival at Reed in the fall of 2005, she has taught a wide variety of courses on nineteenth-century and twentieth-century French literature, theater, and film, and has advised and co-advised senior theses in French, English, Lit-Theater as well as Lit-History. Catherine Witt received her BA in modern history and French literature from Oxford University (Merton College), a Masters in modern European literature from the University of Sussex, and a PhD in French and Italian from Princeton University. She studied at the École Normale Supérieure in Paris and was a visiting scholar (pensionnaire scientifique) at the Centre d’Études Poétiques (ENS-Lyon).

Nicolas Valazza‘s primary research interests lie in the relationship between painting and literature, poetry and book history in 19th-century France. His first book, Crise de plume et Souveraineté du pinceau. Écrire la peinture de Diderot à Proust (Classiques Garnier, 2013) explores the development of French art criticism as a literary genre, in light of the emerging paradigm of sovereignty of painting. The thesis at the core of the book is that the fall of the ut pictura poesis regime, which was governing the classical relationship between painting and literature until the second half of the 18th century, represents a critical moment in the discourse on art—corresponding to the birth of art criticism with Diderot—while causing a proliferation of new literary forms in the 19th century. His second book, La Poésie délivrée (Droz, 2018), tries to answer a straightforward question: Why did some of the most influential French poets of the second half of the nineteenth century, from the masters of Parnassus to Mallarmé, struggle endlessly to publish books? Situated at the crossroads of literary analysis and book history, La Poésie délivrée examines the singular cases of certain poets, in particular Verlaine, Rimbaud and Mallarmé, in light of the publishing context of the period, characterized by the triumph of the novel at the expense of poetry. Faced with increasing difficulties, often made insurmountable, in their respective attempts to publish books, these poets were thus forced to find other mediums on the fringes of regular publishing (collective volumes, small literary journals, albums, artists’ books, etc.), in order to disseminate their works. The purpose of La Poésie délivrée is to show how such a proliferation of mediums significantly contributed to the renewal of poetic forms at the end of the nineteenth century and, ultimately, to the reinvention of the poetry book.