Brigid O’Keeffe, “Esperanto and Languages of Internationalism in Revolutionary Russia”

Register for the event here.

In 1887, a Jewish eye doctor named L.L. Zamenhof launched his international auxiliary language “Esperanto” from the western borderlands of a tsarist empire in crisis. In her new book, Brigid O’Keeffe traces the history of Esperanto as a utopian vision rooted in late imperial Russian culture through to its rise as a vibrant global movement that inspired women and men around the world in the late nineteenth and early twentieth centuries. Esperanto emerged in an era of keenly felt globalization, revolutionary upheaval, and wide-eyed possibility – a time of feverish but long since forgotten debate over global language politics. To better appreciate the lived experience of internationalism in revolutionary Russia, O’Keeffe focuses on the ordinary people who deployed Esperanto in search of global citizenship, border-defying camaraderie, transnational solidarities, and creative solutions to the modern dilemmas of Babel. She also examines the Bolsheviks’ (dis)engagement of the so-called “international language question” to show how language politics distinctively shaped Soviet internationalism in its formative years. Although Esperanto and Esperantists have long been dismissed to the margins and footnotes of history, O’Keeffe proposes that revolutionary Russia’s Esperantists were exemplars of their era. Their triumphs, frustrations, and tragedies illuminate how and why the Soviet Union ultimately rejected an international language for the global proletariat and chose instead to elevate Russian – “the language of Lenin” – as the language of socialist internationalism. 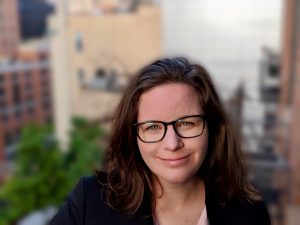 Brigid O’Keeffe is a Professor of History at Brooklyn College of the City University of New York. She is the author of Esperanto and Languages of Internationalism in Revolutionary Russia (Bloomsbury, 2021); New Soviet Gypsies: Nationality, Performance, and Selfhood in the Early Soviet Union (University of Toronto, 2013); and The Multiethnic Soviet Union and its Demise (forthcoming with Bloomsbury’s “Russian Shorts” book series). Her next book project aims to narrate the history of the twentieth century as illuminated by one extraordinary family, the Litvinovs. twitter: @BrigidinBK http://www.brigidokeeffe.com/