This event is sponsored by the Jean-Monnet European Union Center of Excellence.

As the U.S. expands its own goals for growth and prosperity, continuing a productive relationship with partners around the world will be of paramount importance. The relationship between the European Union and the United States has significance for both entities in the realms of security, trade, and international politics.

The future of the relationship between the United States and the European Union will be the focus of when EU Ambassador to the U.S. Stavros Lambrinidis visits campus on Feb. 17 for a fireside chat with Jean Monnet Chair and Professor of Political Science Nils Ringe,“Adapting the EU-U.S. Relationship to New Challenges.” The event, held from 4–5:30 p.m. at the Pyle Center, is free and open to the public.

“While the transatlantic partnership has come under strain in the recent past, it continues to be the capstone of international economics, security and diplomatic cooperation,” Ringe said. “Working in concert, the U.S. and EU can bring about substantial change around the world and jointly advance their shared interests and values, even in times when crises abound—perhaps especially in those times. The visit of the ambassador signals how the UW–Madison remains at the forefront of European and European Union studies in the U.S., and more importantly, reflects the recognition and status of the state of Wisconsin and our university worldwide.”

The ambassador will arrive at the University of Wisconsin–Madison on Feb. 17 as part of a two-day trip to Wisconsin, where he will meet with individuals on campus, as well as local and state politicians and leaders.

Lambrinidis, an attorney by training who specializes in arbitration and international trade, has filled roles such as foreign affairs minister of Greece, member of the European Parliament for the Greek Social Democratic Party, and European Union special representative for human rights (2012–2019).

The European Union Delegation to the U.S. in Washington, D.C. chose to visit Madison in part because of UW–Madison’s EU funded Jean Monnet Center of Excellence for Comparative Populism, which engages experts worldwide to illuminate the widespread phenomenon of populism in developed and developing democracies. The EU has a longstanding partnership with the university. The European Commission, the executive branch of the EU, sponsors the Erasmus + granting competition and funds research, graduate training, and public outreach together with a steady two-way flow of people, projects, and ideas across the Atlantic. Named after the architect of European unity post-1945, Jean Monnet (1888–1979), the Erasmus + granting program has produced a global research network of approximately 100 Centers of Excellence. 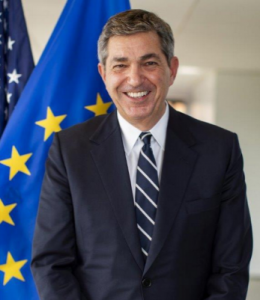 His Excellency, Ambassador Stavros Lambrinidis is the Ambassador of the European Union to the United States, as of March 1, 2019.

From 2012 to February 2019, he served as the European Union Special Representative for Human Rights.

In 2011, he was Foreign Affairs Minister of Greece.

Between 1988 and 1993 he worked as an Attorney at Wilmer, Cutler & Pickering in Washington, D.C., specializing in international trade, transactions, and arbitration.

Mr. Lambrinidis was born in Athens, Greece in 1962. He studied Economics and Political Science at Amherst College (Bachelor of Arts degree, 1984) and Law at Yale Law School (Juris Doctor degree, 1988), where he was also Managing Editor of The Yale Journal of International Law. He is a 1980 graduate of the Athens College High School in Greece. He is married and has a daughter.